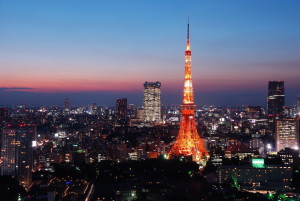 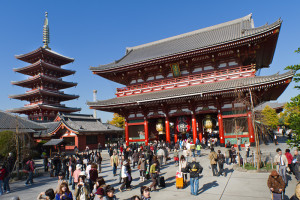 It was not by mere chance that Japan was one of Milan Expo 2015’s main attractions. Its “Harmonious diversity”, narrated through the history of a vast food culture inspired by Nature, has not only attracted visitors like no other pavillion but has awakened in all the desire to visit the Country, still wrapped in mystery. Rich in apparent contrasts, Japan soon becomes so easy to understand as you plunge in the constant celebration of life which rules all daily rhythms, every day of the year, anywhere in the Country. Anytime, be it downtown Tokyo or in some secluded rural areas, by Mount Fuji or by the Pacific Ocean, life is celebrated according to Nature’s rhythms and, most of all, it’s all about thankfulness. You are thankful at a table by means of expressions such as Itadakimasu (a way of being thankful before a meal), Gochisosama (being thankful after a meal) and Osusowake, a sense of sharing which embodies the Country of the rising sun’s philosophy more than most. It’s done on the occasion of the one hundred thousand matsuri, popular celebrations born as rituals of health and prosperity for the community. It’s done during Hanami, which means “to admire cherry tree blossoming” (Sakura in Japanese) or on the occasion of main fireworks which light up summer nights or while enjoying the Tea ceremony which takes place in Tokyo in October while admiring trees turning red. But also on winter nights enlightened by a thousand decorations. For, as tea master Sen no Rikyu:” This very moment we are enjoying our tea may never come back again”. So, while trying to penetrate this spirit which permeates Japan’s culture, you can fully enjoy all that the Country has to offer. Starting from its capital city, where the Tokyo Tower is a must see, inspired by the 333 meter high crosslinked Eiffel Tower, from which observation points located at 150/250 meters in height, you can admire the skyline by day or night for a first view of the city and 23 special wards, the true focus of a city in 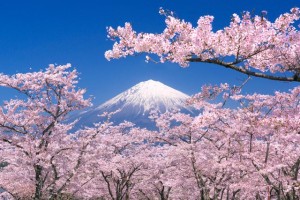 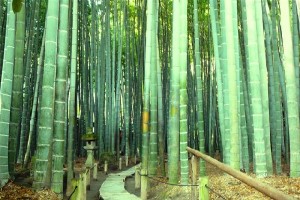 constant evolution, where past, present and future live together in perfect harmony. The all efficient public transportation network allows you to easily move from one area to another city so as to visit its main highlights. The Imperial Palace and Gardens (the perimeter and park are open to the public whereas the palace is still the residence of the imperial family and therefore not accessible) and near which lie the Parliament and the National Theatre, close to the district of Ginza, center of luxury shopping and gastronomy but also home to the external market Tsukiji, one of Japan’s most important one and Kabukiza Theatre, the only theater in the world specializing in Kabuki and which celebrated last year its 125th anniversary. While in Ueno district of Taito, the main museums such as the Tokyo National Museum, which houses more than 100 thousand objects of art covering the story from the Japanese Jomon period to the twentieth century, the National Art Museum Western Museum national science coexist with the gardens of cherrytrees and the Pond Shinobazu which, full of lotus plants, houses a permanent colony of black cormorants. At its core, the picturesque small Bentendo octagonal shrine is dedicated to the goddess Benzaiten, one of the seven goddesses of happiness. Ueno also houses Toshogu Shinto temple, built in 1627 according to the last will of Ieyasu Tokugawa. To the east of Ueno, Asakusa offers ancient streets and shops with a vintage atmosphere  and the Sensoji Temple, the oldest in the city, whereas Japan’s technological soul is located mainly in Akihabara (south and north of Ueno Ginza), the widest sales area in the world for electronic goods and computers, both new and used. And in the same neighborhood, one can find shops which sell souls, manga, dōjinshi and action figures. For those who are looking for the more traditional Japan, about 50 km southwest of Tokyio is Kamakura, Kanagawa prefectural city linked to the capital by the railway line to Yokosuka. Small coastal town with friendly atmosphere, it is full of temples and altars and preserves an important historical heritage in the Museum of the national heritage. Do not miss the Shinto shrine Tsurugaoka Hachiman, which driveway is 1.8 km long and 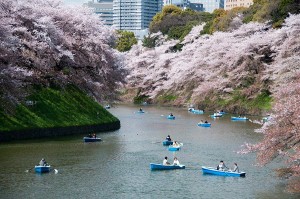 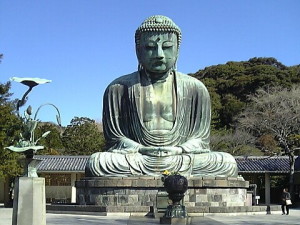 reaches to the ocean. It is bordered in the section next to the sanctuary, by cherrytrees. Whereas Hokokuji – also known as Takedera, Bamboo Temple- is a Zen Buddhist temple located in a bamboo forest that stands out in the sky, giving an atmosphere of peace and serenity hard to forget. But the most famous symbol of Kamakura is definitely the Daibutsu, the Great Buddha statue ,Japan’s second highest (13.35 meters) after Nara’s, which is located inside the Kotokuin Temple. Tokyo and Kamakura certainly do not quench the traveler’s thirst to visit this amazing Country, which not only offers history, tradition unspoilt landscapes and atmosphere  but it is constantly permeated by sensitivity, respect and education of its people. Not to mention an exquisite gastronomy that is the most diverse in the world and which is able to mix tradition and modernity in a sublime way. So much so that one returns to Japan several times, as noted by Ana – All Nippon Airways, Japan’s innovative and original airline which takes good care of its passengers throughout their travel experience, thanks to a service scheme according to the “Inspiration of Japan” philosophy. With its fleet, which also includes the B787 Dreamliner, the most innovative aircraft in the world (state of the art technology and carbon fiber), Ana connects worldwide via its Haneda hub – half an hour away from downtown Tokyo- and Narita airport, whereas it provides 113 routes with a total of 50 cities served within Japan. 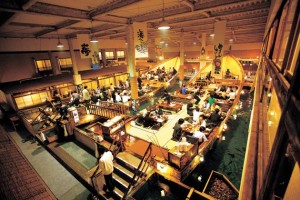 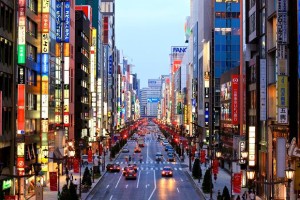