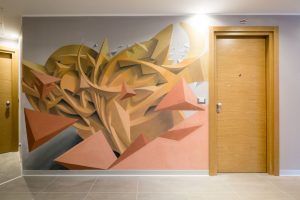 Overlooking Piazza 4 November, on the west side of the Central Station of Milan, the historical headquarters of Philips Palace, dating back to 1949, from unused time, after a series of renovations started in 2014, it has become at the end February NYX Hotel Milano, a 4-star 11-storey 299 rooms with 21 suites. With NYX Hotels, the Leonardo Hotels Group launches its fourth brand, emblem of a whole new generation of hotels, choosing Milan and Italy as the first country in which to invest to establish itself in Europe. The concept that the group proposes with NYX brand is an idea of ​​hotel in which in addition to providing all sorts of conveniences, for those who stay is also possible to immerse themselves in an environment where the union of art, design and events isthe absolute protagonist. The hotel stands as a real stage where artists, strictly local, can create and display their works, installations and exclusive design objects indoors and outside of the structure. The restaurant with 200 seats, the bar with 100 seats and the patio with 120 seats are connected each other, creating a unique setting, a sort of living room in which to relax . Furnishings and accessories have been specially designed for the hotel and its rooms decorated by Italian companies celebrating the “made in Italy” more creative and innovative. The interior designer who oversaw the preparation is Andreas Neudahm, well-known name in the world of restructuring of hotels and  top luxury resorts in the world like the Marriott and the Four Points Sheraton. Working on interior design of Nyx hotel in Milan, Neudahm has skillfully combined natural stone, wood and leather with painted surfaces. Gold and natural gray are the colors that dominate.Credits: NYX Hotel 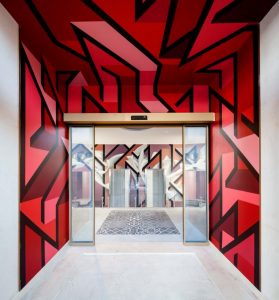