New concept and new menus at the Grand Hotel Palace in Rome, which honors the international atmospheres of what was the Palazzo degli Ambasciatori. 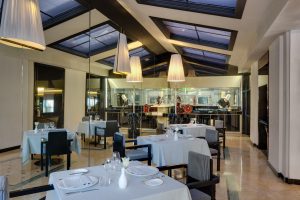 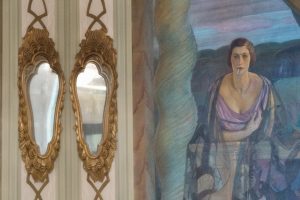 Dishes that hold a strong bond with all 5 Continents in an ethnic contamination of carefully selected raw materials. The creativity of chef Riccardo Zanni pays homage to the Palazzo degli Ambasciatori, a point of reference for diplomats who over the years have stayed in Rome and now hosts the Grand Hotel Palace. And it is a tribute made with the wisdom of those who, after having trained as a chef, gaining experience in Roman cuisine and the secrets of tradition, have long traveled, experimenting with international cuisine and experimenting with different and innovative techniques. The quality of the ingredients, the in-depth study of every single step – from the choice of the raw material to the preparation method, up to the flattening – are the cornerstones on which the Cadorin restaurant and the Bistrot menus are based. And then there are creations such as the “Risotto with wine pears, chicken and berberè”, where the typicality of classic cuisine – pears cooked with wine – is complemented by the 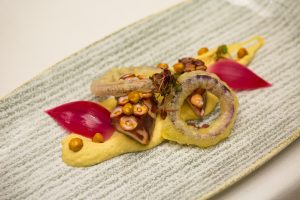 original spice of Ethiopian and Eritreaic cuisine. Or the delicious “Roasted octopus, hummus and Tropea onion”. There also are ingredients such as quinoa, mango, curry or the less usual teff, an Ethiopian cereal from which flour is obtained and then a bread, used by chef Zanni in his “Creamy white chocolate with lime and teff crumble”. A gourmet menu is served in the Cadorin restaurant, inside the exclusive lobby of the Grand Hotel Palace decorated with frescoes made in 1926 by the Venetian artist Guido Cadorin. But all the hotel’s food is experiencing great innovations, starting with breakfast – increasingly full-bodied and with the introduction of an oriental corner – and the reopening of the open kitchen in the à la carte restaurant, to allow guests to 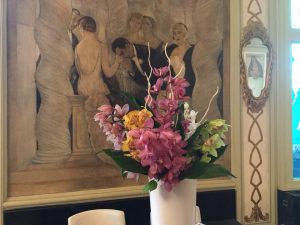 see the chef at work and at the same time to stay on the terrace overlooking via Veneto. It is in fact here that the Grand Hotel Palace is located, in front of the American Embassy and in the historic center, between Piazza di Spagna and Villa Borghese, inside that majestic period building – an elegant example of Roman modernism – that represents one of the masterpieces of the architect Marcello Piacentini. The hotel is part of the Millennium Hotels & Resorts Leng’s Collection (Preferred Hotels & Resorts affiliate) and has 87 rooms spread over 7 floors, including the Signature Suite, the Executive Suites with magnificent terraces and a Privilege Suite with panoramic views. There also are 3 meeting rooms and a Spa with fitness area and wellness center managed by the Roman brand Kami Spa. 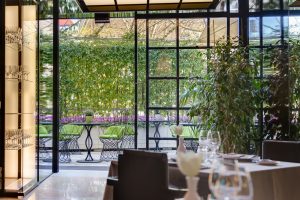 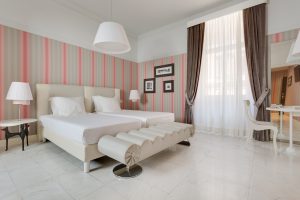