The Punta Tragara hotel, a jewel of style and hospitality set in the enchanting Capri, will reopen on April, the 13th, for the new season. 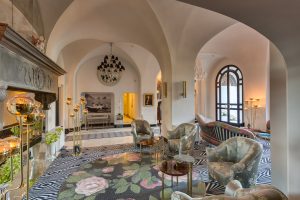 Sea View. And already you would feel satisfied, especially because the sea in question is that of Capri and the eyes immediately meets the famous Faraglioni. And yet the hotel Punta Tragara remains an indelible souvenir in the memory of those who stay there not only for its incredible location but for all that beautiful, elegant and even “good” offers its guests. Located just 10 minutes from the famous and lively Piazzetta caprese, this ancient villa – whose preliminary design is attributed to Le Corbusier – was originally the summer residence of the Marquis Vismara, who sold it at the beginning of the ’50s to Count Manfredi. Transformed from the latter into luxury apartments for rich families on holiday on the island, the villa was finally completely renovated and transformed into a 5-star hotel that still manages to maintain its original charm unaltered. Also following the last 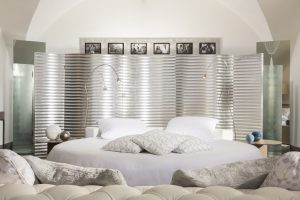 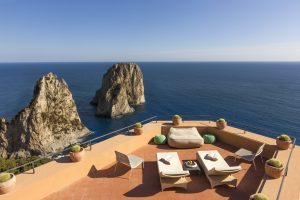 restructuring plan completed in the past few years by the Manfredi family, Punta Tragara – a member of Small Luxury Hotels of the World – offers an unmistakable, sophisticated and refined style. The ancient elegance, the charm of contemporary works of art and design, the archaeological finds and antiques as well as the objects that have been part of the villa since the early days create a perfect combination that makes the hotel a unique jewel of its kind. The 44 rooms and suites are each different from the others, just to give a unlike emotion in every space. Especially for the 6 “special” suites, where the particular position, the architectural cut and the interior design combine to create 6 small precious islands. So there is “Tragara”, a real tribute to the space, with 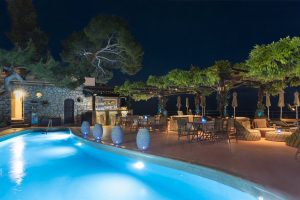 arches and vaults without doors and without constraints that recreate the atmosphere of the alcove and from whose terrace the view sweeps across the Faraglioni, the bay of Marina Piccola and Capri; “Monacone”, with its wide balcony like the open deck of a ship, is the suite that, more than any other, makes the sensation of hovering in the air, flying over the waves. Or even “Penthouse”, where architecture sometimes gradually introduces to the large terrace and where the large bathroom with sauna and oval carved tub in Corian becomes the ideal place to relax. Not least the gastronomic proposal, which at Punta Tragara is

curated (since 2013) by chef Luigi Lionetti – Caprese doc – and his restaurant Monzù, with indoor dining room, panoramic veranda and an elegant room with glass walls overlooking the sea. A true gourmet excellence that of Lionetti, whose dishes represent an explosion of the flavors of the island in a reinterpretation of traditional Neapolitan and Caprese cuisine that offers unforgettable emotions and tastes: from orange soup, scampi, buffalo ricotta with fennel cream and bottarga pasta and potatoes with lobster and provola of Monti Lattari, until the squid filled with seasonal vegetables, datterini and cappon magro. Authentic menus as modern and elegant (also dedicated to vegetarians, vegans and those suffering from gluten intolerance) that go well 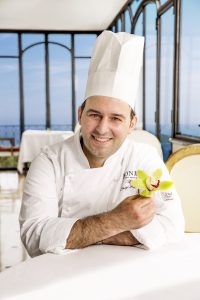 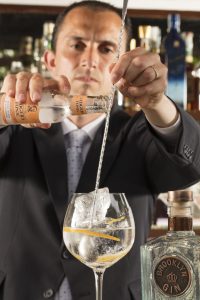 with the 200 precious labels kept in the Tragara Wine Cave, an enoteca obtained within the typical Capri grotto. But before dinner you can not miss another of the top moments at Punta Tragara, the aperitif at Monzù Gin Club & American Bar, where barman Daniele Chirico manages to create cocktails and especially unmissable gin and tonic combining 70 labels of gin and 13 types of tonic water, to which is added a rich selection of botanicals, the aromas and spices that give the cocktails the right touch of originality. Nor should we forget the original desserts of the pastry chef Cristina Passini: among its delicacies, the Lemon Assoluto, which recalls the fragrances of the Lionetti menu, the Tiramisù in my own way, which is made directly at the table, and 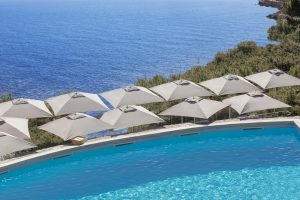 the Lingotto almond and pear , mascarpone creamy, mango confit, curry sorbet. The Ristorante Monzù and the Hotel Punta Tragara are part of the Manfredi Fine Hotel Collection, also present in Capri with the starred Mammà restaurant. The hotel’s offer also includes a wellness and spa center and two outdoor swimming pools: the heated one with hydromassage jets for decongesting and invigorating baths is located in the lush green of the garden, right next to the panoramic Solarium; the other is an “infinity pool” and overlooks the small and wonderful beach of Marina Piccola. Just below the hotel there is the Belvedere Tragara where, from the road that runs along the terrace, you can reach the Pizzolungo promenade that leads to the exclusive Fontelina beaches, to the house of Curzio Malaparte, to the Grotta Matermania and the Arco Naturale. (www.hoteltragara.com) 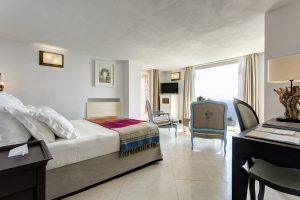 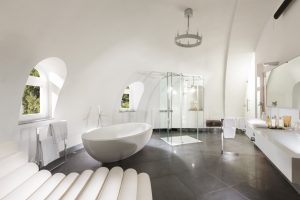