The skyline of Doha, the capital of Qatar, is constantly evolving with the “complicity” of world-renowned archistars. 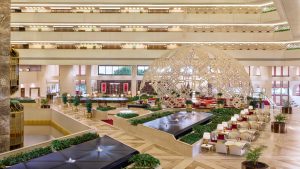 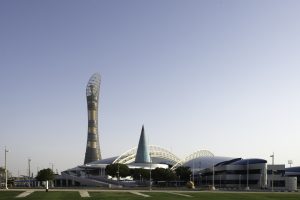 Museums, residential complexes, business towers and state-of-the-art infrastructures designed by the most famous architects make Doha even more interesting. The city certainly deserves the most trendy, cosmopolitan, name of the Persian Gulf thanks buildings in which the traditional forms of Arab culture perfectly combine with innovative design elements for a harmonious and fascinating urban landscape.
Sheraton Grand Doha Resort and Convention Hotel
The city’s first luxury hotel was built in 1982 where once there was only desert. The architectural firm William L. Pererira Associates designed the building based on a steel structure and made of suspended prefabricated units connected to the main core. The Sheraton was sponsored by the Government of Qatar and it is located in the West Bay area. After a 9 month renovation, it reopened its doors to guests in 2016.
The Aspire Tower
Created by Hadi Simaan to host the symbolic flame of the 2006 Asian Games, the Tower represents a hand holding a torch and it is currently the tallest structure in the whole country (300 meters). Located at the Aspire Zone, a multi-purpose complex dedicated to sport, entertainment and shopping, it also hosts The Torch Doham, a 5-star hotel that features an outdoor swimming pool on the 19th floor overlooking the skyline, the Torch Tea Garden on the 21st floor and a 360° rotating restaurant with a panoramic terrace on the 47th floor. 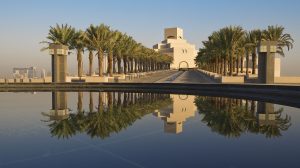 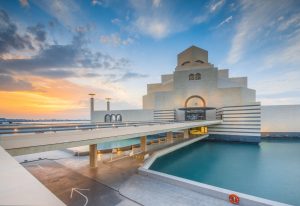 Museum of Islamic Art (MIA)
Completed in 2008, it bears the signature of I. M. Pei. The building, influenced by ancient Arab architecture but with a unique and modern design, is home to a valuable collection that includes 14 centuries of Islamic art positioned in the exhibition spaces designed by Wilmotte & Associates, a studio that has collaborated with Pei also in the design of the Louvre in Paris. Built on an island connected to the mainland and located near the port of the dhows (traditional sailing boats) it offers spectacular color effects during the day thanks to the play of sunlight and the reflection of the water on its facades made of stone limestone. On the north side of the MIA, the glass wall offers a panoramic view of the Gulf and the West Bay area.
Qatar National Convention Center (QNCC)
This exhibition center designed by Arata Isozaki is inspired by the cider tree, with its roof supported by giant steel columns in the shape of a branch that create the illusion of two trees adjacent to the large rectangular glass facade. Completed in 2011, the QNCC has meeting spaces, a multi-purpose conference hall with 4 thousand seats, a 2300-seat theater and 3 auditoriums.
Burj Qatar Tower
Work of 2012 by French architect Jean Nouvel, it is a 46-story tower located in one of the most important business districts of Doha. Overlooking the Gulf, it offers office space, a restaurant with panoramic views and a residence. Winner of numerous prizes, it is surmounted by a round dome and a spire covered internally with a stainless steel screen with intricate patterns inspired by traditional mashrabiya, the forced ventilation devices used to shade or divide the spaces.

Qatar National Library
The national library of Qatar designed by Rem Koolhaas, OMA, it has been terminated this year. Diamond-shaped, it consists of a single open space that comfortably accommodates the public and over a million books while the building trolleys, lifted off the ground, are designed to create three shelf corridors. A 120-meter bridge spans the entire library to symbolically link the historical heritage of Qatar with its future.
Next projects
Once again Jean Nouvel is the author of the new National Museum of Qatar. Inspired by the desert rose, it surrounds the Old Palace of Sheikh Abdullah bim Jassim al-Thani and it will become a monument to the historical traditions and heritage of the Country (opening in 2019). “Inspired by Zaha Hadid” and inspired by the seafaring tradition of Qatar, there is the retractable roof of the Al Wakrah Stadium, which will reproduce the wings of a dhow and it will be able to close in about 30 minutes using a series of steel wires. The Stadium, with a capacity of 40 thousand seats, will host the matches of the quarterfinals of the FIFA World Cup 2022. At the end of the football event the capacity of the Stadium will be reduced and half of the structure will be donated to developing countries for the creation of sport facilities.
(www.visitqatar.qa, www.qatarairways.com) 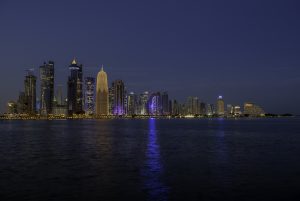 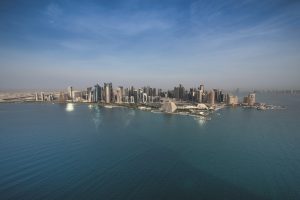