In NYC there are many events scheduled in the 5 districts. Here are some suggestions for a true New York Christmas. 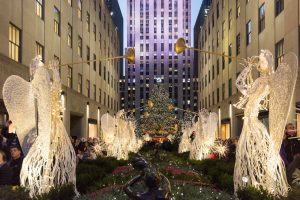 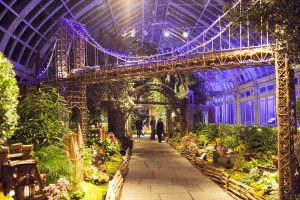 As is tradition, Macy’s Thanksgiving Parade on Thanksgiving Day (November, the 28th) marked the official start of the New York winter festivities along with lighting the Christmas tree at Rockefeller Center, which will take place on December the 4th. Alongside these iconic events, you can immerse yourself in the spirit of the parties by taking part in guided tours, attending shows and concerts, admiring the magnificent lights and shop windows of department stores and stores and much more. And all 5 districts of NYC have a rich schedule in store.
Christmas markets in Manhattan
The main ones are Holiday Shops at Winter Village at Bryant Park, Grand Central Holiday Fair, Union Square Holiday Market and Columbus Circle Holiday Market.
Radio City Christmas Spectacular with the Rockettes, Midtown, Manhattan
Until January, the 5th, 2020, the Rockettes will be on stage at Radio City Music Hall with Christmas Spectacular. Gorgeous costumes, Christmas songs and dance performances are the inevitable ingredients of this show that has entered the Christmas classics of New York.
The Origami Holiday Tree, Upper West Side, Manhattan
The American Museum of Natural History proposes a Christmas tradition that has been repeated for 40 years: the Origami Holiday Tree, a Christmas tree of almost 4 meters decorated with over 800 origami made by local, national and international artists. The theme chosen for this year for decorations is T.Rex and Friends: History in the Making, with paper creations inspired by the T.Rex: the Ultimate Predator museum exhibition.
NYC Winter Lantern Festival, Randall Manor, Staten Island
The Festival returns for the second year to Staten Island at the Snug Harbor Cultural Center and Botanical Garden, which until January, the 12th, will be lit by over 50 LED lanterns and will come alive with live performances of Chinese dance and art. 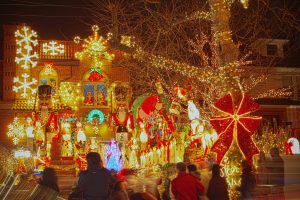 Holiday Lights, Fordham, the Bronx
Throughout the holiday season, the Bronx Zoo will be decorated with light installations, including animal sculptures illuminated by LED lights and Chinese lanterns, which will accompany visitors on their journey through the park to Astor Court, where they can attend one light show. The entertainment program also includes Christmas music, shows, ice sculptures, a Christmas train, seasonal delicacies and numerous souvenirs.
Gingerbread Lane, Flushing Meadows Corona Park, Queens
The Gingerbread Village, the largest gingerbread village in the world, is back more delicious than ever in the New York Hall of Science, where it will remain until January, the 13th. The installation designed by chef Jon Lovitch is made only with editable material which includes, in addition to gingerbread, also decorations made with candies, chocolate and icing.
A Christmas Carol. Greenwich Village, Manhattan; Flushing Meadows Corona Park, Queens
In December 1867 Charles Dickens arrived in New York City to present his Christmas classic “A Christmas Carol”. The show remained in the city for a month, with completely sold out dates. This year it will be possible to watch the story of Ebenezer Scrooge and the ghosts of Christmas, Past, Present and Future, in different theaters in the city. For a truly unique setting, don’t miss the 1832 Merchant’s House Museum in Greenwich Village until January, the 4th, where an actor will play the figure of Charles Dickens and narrate the popular Christmas story in the Greek Revival-style museum hall.
Christmas Lights Tour, Dyker Heights, Brooklyn
Considered one of the most famous attractions in Brooklyn, the Christmas Lights Tour proposed by A Slice of Brookyn allows you to visit Dyker Heights, famous for its private Christmas decorations that are among the most spectacular and extravagant in the world.

Apollo Theater, Harlem, Manhattan
The Apollo Theater, which celebrated its 85th anniversary in 2019, will offer several events during the Christmas season. We report the gospel legends Yolanda Adams and Donald Lawrence, who will perform on December, the 21st, during the annual Holiday Joy concert: A Gospel Celebration.
Candlelight Tour, Richmond Town, Staten Island
From December, the 14th to the 21st, a dip in the past awaits us, taking part in the historic Richmond Town tour, which for the occasion will be lit with candles and oil lamps.
New Years Eve Times Square Ball Drop, Times Square, Manhattan
Every year, millions of New Yorkers and visitors from all over the world come to see the Times Square Ball Drop. New Year’s Waterford Crystal Times Square Ball shines in Times Square throughout the Christmas season, but the unmissable event will be on December, the 31st, when the sphere will descend on the square to celebrate the start of the new year.
New Year’s Eve Fireworks, Prospect Park, Brooklyn
Far from the hustle and bustle of Central Park, on New Year’s Eve the Prospect Park Grand Army Plaza will host live music followed by the famous midnight fireworks display.
(Credits @NYC & Company) 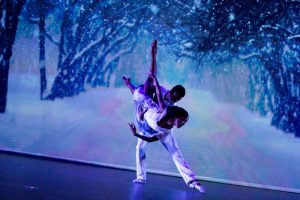