Chef Rubio and designer Fiilppo Protasoni will be featured at the Fuorisalone of Milan for the launch of Origami Italiani. 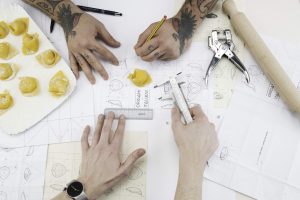 A new concept for the fresh pasta, an integrated system of food & design by Chef Rubio and designer Filippo Protasoni. Origami Italiani will be presented in collaboration with Circus at the Milan Fuorisalone during the usual design week in April in the premises of Pasta d’Autore, family pasta restaurant-laboratory within the 5Vie Art + Design District, in via Cesare Correnti 7. Through Origami Italiani Chef Rubio proposes and reaffirms his idea of ​​responsible innovation in the production chain of fresh pasta, inviting producers and the public to “get their hands dirty” with a series of short practical workshops where to realize alone the exclusive pack Origami Italiani in its version for tortelli and share as well, through the experience, the story of an idea of ​​future consumption of pasta made by hand. Within the space of Pasta d’Autore there is a open access fair-exhibition which recounts the development of the product system, the evolution of the project and the exhibition of prototypes. The exhibition is open daily during the workshops with an extension of up to 23 hours nightly on April, 5th.
The workshops are free, with the possibility of booking on site: eight people in turn, lasted about 15 minutes.
Laboratories times:
April, 4th: 11-13 e 15.30-20-30
April, 5th: 11-13 e 15.30-20.30 / dining possibilities on Pasta d’Autore 20.30 to 23.00
April, 6th: 11-13 – 15.30-20.30
April, 7th: ore 11-13 – 15.30-20.30
April, 8th and 9th: 10-12.30 – 16.00-20.30 / dining possibilities on Pasta d’Autore 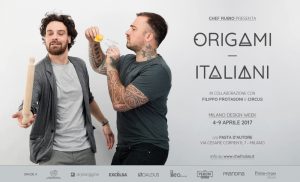