Celebrity Cruises is an encore in the Edge class and reveals all the wonders of the new Celebrity Apex which, starting from April 2020, will touch the pinnacle of luxury on the sea. 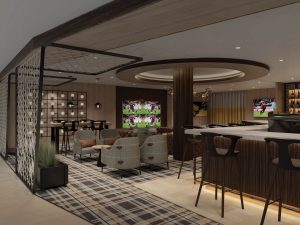 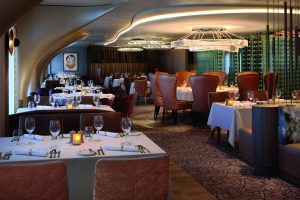 When Celebrity Apex will be launched, on March, the 30th, Celebrity Cruises will not only continue the revolutionary Edge series inaugurated in 2018 with the launch of Celebrity Edge, but will take the concept of modern cruising to a very high and innovative level, with the latest trends in gastronomy, wellness and entertainment. At the top of the cruise industry, Celebrity Edge has received more than 50 awards including that of the prestigious TIME Magazine, which has included it among the most beautiful places in the world for 2019. The ship has impressed with its innovative design “addressed outside “and for the visionary spaces created by world-renowned designers including Kelly Hoppen, MBE (rooms and suites); Tom Wright of WKK (outdoor areas and bridges); Patricia Urquiola (interior design of The Club and Eden); Scott Butler, AIA (architect of Eden and The Theater); Jouin Manku (Grand Plaza) and many others. Celebrity Apex hosts on board the same elements that are transformed following the hours of the day such as the Magic Carpet, the platform that extends “cantilever” from the ship and which, depending on the bridge where it is located, invites guests for a drink, a delicious dinner or to enjoy a unique view from Ponte 16; The Retreat, a place that offers an exclusive experience reserved for guests of the suites; the rooms, which become one with the outside thanks to the Infinite Veranda balconies; 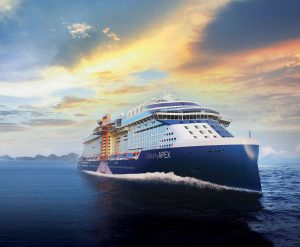 the opportunity to relax in the internal and external gardens; the exclusive two-story Edge Villas, with private terrace and children’s pool. And still high-level spaces in all common areas, made with contemporary design elements that are a strength of the ships of the Edge series. To all this, on Celebrity Apex are added new features and luxury experiences such as new restaurants and new menus, including those Michelin-starred chef Cornelius Gallagher; a wide range of innovations in the beauty, fitness and wellness sectors, with a new collaboration in the management of the SPA signed with OneSpaWorld and an innovative program in the wellness sanctuary created by the acclaimed British interior designer Kelly Hoppen; important changes to The Theater, with cutting-edge technologies for three brand new productions that will fascinate the public and many new experiences within Eden to be enjoyed at all hours of the day. Celebrity Apex will debut on spring with a mini-season of five itineraries to European destinations including the Norwegian fjords, the northern coasts of Spain and Portugal and a new 10-night cruise in Amsterdam, Copenhagen, Oslo and Paris. After the mini-season in Northern Europe, for the inaugural summer of Celebrity Apex, 7-12 night cruises in the Mediterranean are planned – from April to October – with stops in “wishlist” cities such as Lisbon, Istanbul, Monte Carlo, Cannes. From November to April 2021 the ship will finally be positioned in Fort Lauderdale for a series of Caribbean cruises. (celebritycruises.com).